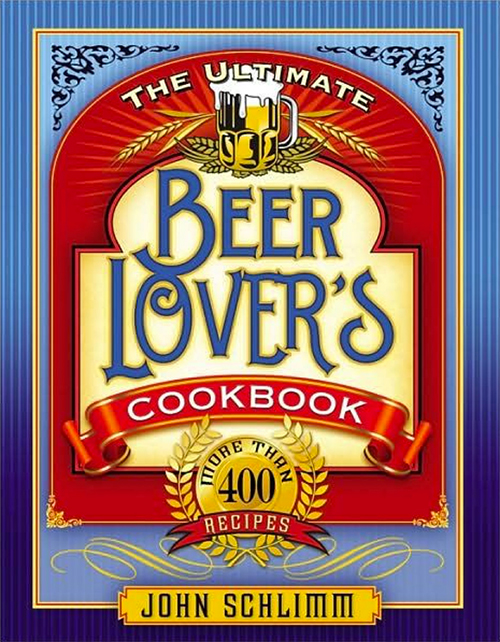 More than ten years in the making, The Ultimate Beer Lover’s Cookbook is an unprecedented collection of more than 400 food and drink recipes containing beer as a main ingredient.

More than 400 Recipes All Made with Beer

Have Your Beer, And Eat It Too! A favorite brewski adds zest and flavor to almost any dish…

More than ten years in the making, The Ultimate Beer Lover’s Cookbook is a landmark collection of recipes, making it the world’s largest beer cookbook ever written. Every single one of its more than 400 food and drink recipes ensures that the world’s most satisfying beverage will finally get its well-deserved seat at the table. Written by John Schlimm, a member of one of the oldest brewing families in the United States, no other cookbook has ever contained this impressive quantity of beer-based recipes without sacrificing a drop of quality.

In addition to the numerous, amazing food recipes spanning appetizers to desserts, The Ultimate Beer Lover’s Cookbook also serves as a party drinks handbook with an unprecedented collection of 150 recipes for mixed drinks, chuggers, shots, chasers, party punches, milkshakes, and flaming drinks — all made with beer. With drinks like the Buzzy Navel, Beach Party Punch, the Beertini, and the Skip & Go Naked, this collection of beer’s greatest pairings is sure to leave its followers spinning for joy.

“More than a decade in the making, Schlimm’s mammoth culinary valentine to beer is worth the wait… Schlimm has compiled a definitive beer recipe sourcebook that will be appreciated by beer-lovers for years to come.”  ~Publishers Weekly

“There’s much to be admired (and by admired we mean ingested) within the pages of a new modern-day classic called The Ultimate Beer Lover’s Cookbook…But after all that spectacular beer on a plate, beer in a glass suddenly seems a bit…unfortunate.” ~Urban Daddy

“Want to experience the joy of cooking with beer?  Then check out John Schlimm’s The Ultimate Beer Lover’s Cookbook…”  ~Playboy.com

“The cookbook that will take beer to another level!” ~OK! Magazine

“Do you love beer?  I mean, do you really love beer?  If that is the case, then you have to read this book…It’s the most comprehensive and impressive cooking resource using beer as an ingredient…If you can eat it, The Ultimate Beer Lover’s Cookbook let’s you do it with beer.” ~TailgatingIdeas.com

“…this is an amusing book and it provides an interesting alternative to the normal fare.  This is the ultimate cookbook for beer lovers…” ~SheNeedsToKnow.com