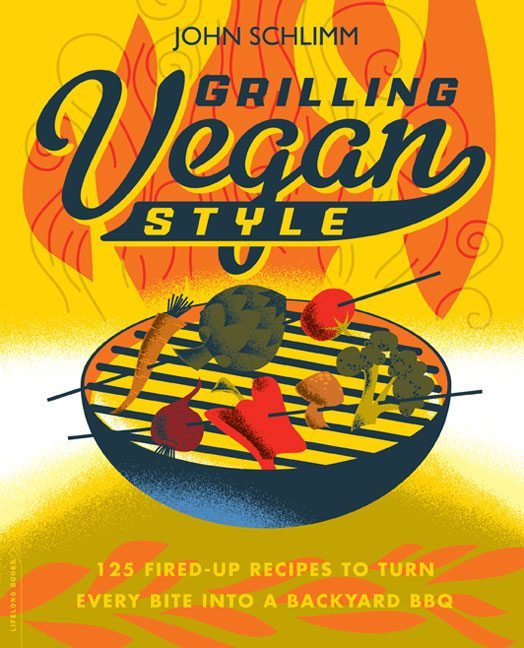 Nothing says summer more than a feast hot off the barbecue. Grilling Vegan Style serves up backyard cooking and entertaining like never before.

“Burgers, sauces, and sides that will rock the socks off omni and vegan guests.”
– Examiner.com

Grilling Vegan Style: 125 Fired-Up Recipes to Turn Every Bite into a Backyard BBQ

Nothing says summer more than a feast hot off the barbecue. A comprehensive vegan grilling handbook and cookbook, Grilling Vegan Style serves up backyard cooking and entertaining like never before. Running the gamut from plant-based appetizers, salads, sides, kabobs, and burgers to main dishes, desserts, and, of course, cocktails, John Schlimm also demonstrates the art of grilling faux meats, with key info on everything you need for proper heat and the best taste. With color photographs throughout, this cookbook ensures that the magic of a summer barbecue or a night around the campfire can ignite your taste buds all year long.

“John Schlimm adds sizzle and flare to plant-based dishes up and down the picnic table.  Who knew you could have so much fun grilling everything from salads and sandwiches to desserts?!  Grilling Vegan Style is more than a cookbook; it’s a go-to handbook for outdoor living, eating, and celebrating.” ~Rory Freedman, Co-Author of the #1 New York Times bestseller Skinny Bitch

“Grilling Vegan Style cracks the code to making summer last all year round by combining equal parts compassion, fire, and nature’s freshest ingredients.  This is a feast the whole family can enjoy, and feel good about!” ~Gene Baur, President and Co-Founder of Farm Sanctuary

“When I was a kid, the best thing in the world was grilling time. Grilling Vegan Style brings the nostalgia back and highlights that for me as a new dad, there is a way to share the ritual of ‘food and fire’ with my son.” ~Biz Stone, Co-Founder of Twitter and Obvious

“Grilling Vegan Style brings you the best of all possible worlds—delicious, fun foods prepared in the most healthful way. For everyone who loves grilling, this is the way to do it right.” ~Neal Barnard, MD, President of the Physicians Committee for Responsible Medicine

“We often cite several inspirations for what we do at MATT & NAT, however few of them get us salivating as does great vegan food! John’s pioneering take on the traditional BBQ in Grilling Vegan Style (including desserts!) has gotten us VERY excited. Another cultural phenomenon has been brought into the 21st century, thank you John for providing vegans a path to partake in a favorite summertime tradition!” ~Inder Bedi, Founder and Creative Director of MATT & NAT

“With Grilling Vegan Style, John has shown you ways to bring out flavors and taste you never thought possible. John’s recipe for Party on South Peach Salsa especially is to die for and will go with almost anything.” ~Chef Paul Kirk, CWC, Ph.B., B.S.A.S., Kansas City Baron of BBQ, and Author of Championship Barbecue and America’s Best BBQ

“I have to admit that I was a little skeptical about a Vegan Grilling book. After all in my world it’s all about the meat. I might even be considered a Non-Vegan! But John’s book has opened my eyes to the concept and his recipes are outstanding. The Slip-N-Sliders is a great recipe for everyone and I guarantee I’m going to try the Strawberry Skewers with Vanilla, I Scream! real soon!” ~Ray Lampe AKA Dr. BBQ, Author of Ribs, Chops, Steaks, and Wings and Dr. BBQ’s Big-Time Barbecue Cookbook

“I dare you to flip through this book and not already start to daydream about which mouth-watering recipe you’d use to wow your friends at the next backyard BBQ.  I can’t decide who would be more fun to grill for: hipster gourmands on a rooftop in Brooklyn or my veganophobic friends in my dad’s backyard in Indiana. The recipes in this book are equal opportunity wowers!” ~Marisa Miller Wolfson, Writer & Director of Vegucated

The Straub Brewery was founded in the 1870s by German immigrant Peter Straub. At the age of 19, during the…

Through their own voices and spirited calls to action, 75 of the world’s most dynamic young activists share their extraordinary…