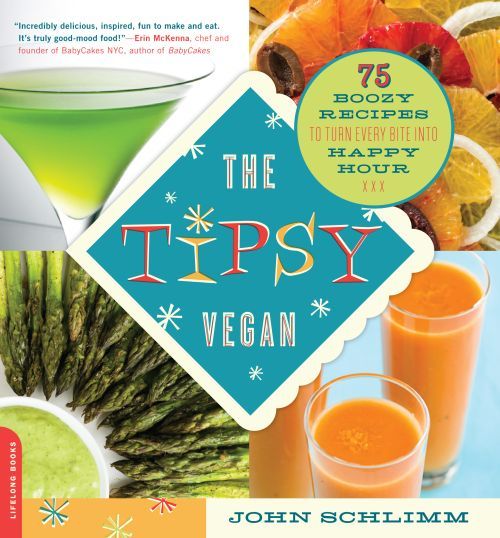 I got a gratis copy of John Schlimm’s The Tipsy Vegan to review for you guys! Rachelhas been on a cookbook review roll, as I’m sure you’ve read, but when I saw “tipsy,” I knew this book was for yours truly. However, this is not a book of vegan cocktails like I thought! It’s all about cooking with wine and liquor. But there are a handful of cocktail recipes as well, they kick off each chapter.

To sum up the book in three words: Fun, challenging, sassy! That’s right, sassy. The tone of the book is very jovial and lighthearted, which I appreciate. And you are encouraged to enjoy your booze! As god intended. One thing I will say is that I’m not sure it’s really a book for beginners. It’s for more of a mid-level to experienced cook. There are lots of ingredients, lots of different techniques involved, and lots of recipes requiring things like ice cream makers and food processors (which I do not have because I’ve slimmed down my kitchen accessories. Oh, life in the big city!). A bowl and spoon are not going to get you very far here. On the other end of the spectrum, this is just the thing for the uninspired cook! It’ll give your cooking a kick in the pants! The recipes and ingredients are inventive and interesting. And the book is entertaining. I’m a fan! 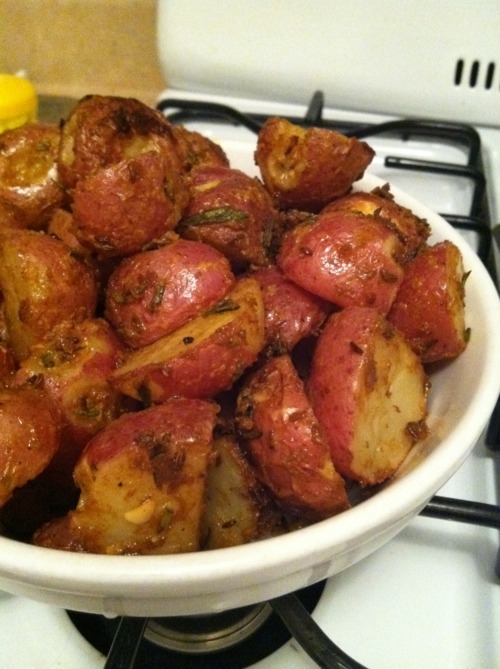 I tried two of the recipes: Bruschetta on a Bender and Rockin’ Roasted Potatoes With Racy Rosemary and Mustard. The potatoes, the recipe for which you can get over on NYT, had vodka in them, which I had because my first housewarming gift was a half-empty bottle of Ketel One (#classy). Both recipes called for vermouth, but the potatoes said you could use a dry white wine instead and the bruschetta said a fruity red would work too. As I don’t know what I’d do with a bottle of vermouth and you better believe I know what to do with two bottles of wine, I opted for the wine. But the book said I could!

I don’t know what you call the sauce I made for the potatoes but it was damn good! Like, I was about to lick the bowl, horseradish and all. I had a little sauce left over and I put it in a cup to save in the fridge. I’m thinking Brussels sprouts!

The bruschetta was interesting because it called for thyme instead of your typical basil. My bro and sis-in-law were ‘bout it for the bruschetta! They both had like seven pieces. I liked it too but I did miss the basil. But there’s really no need to buy a cookbook with a basil bruschetta recipe, is there? And red wine on the tomatoes? Genius! Why don’t we do that all the time? We can from now on. Pish, I don’t even remember what life was like before red wine-soaked tomatoes! 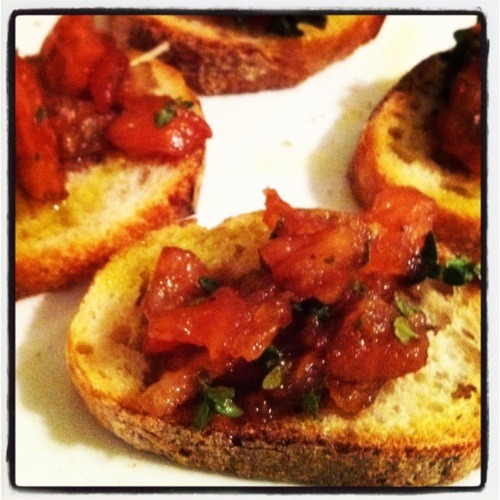 Check it, I scored the Bruschetta on a Bender recipe for you! With permission from Da Capo Press, naturally:

Bruschetta on a Bender

Instructions
Toss the tomatoes with the salt and drain for 30 minutes in a large colander set over a bowl.

Under a hot broiler, toast the bread slices on both sides.

Gently press down on the drained tomatoes to extract even more juices. Then transfer them to another bowl and toss with the balsamic vinegar, dry vermouth, thyme, and oregano.

Season with the pepper to taste. Spoon the tomato mixture in small mounds on top of the toasts and serve at once.

Yay! Now you can make the bruschetta just like your pal Megan.

There are a lot of other great-sounding recipes I still want to try, namely the Merlot ice. Basically a Merlot slushy, it requires a food processor. I’m about to get one just to make it. Can you imagine? A Merlot slushy? Be still my heart!

Before I sign off, I’ll add another point: this book doesn’t really feel like a vegan cookbook, it feels like a “regular” cookbook. It’s not really about being vegan and you aren’t making approximations of omni recipes you’ve been missing; you’re making fun and exciting recipes that are also vegan. I think omnis would certainly enjoy this book too and if not for the title, I doubt they’d notice the absence of animals products. It’s definitely a good cookbook if you’re entertaining a mixed-diet crowd! So I say check it out and get a little crazy. A little crunked, even. Go for it.

My Party Starters via MariaShriver.com: “Bruschetta on a Bender” & “Fried Avocados Paint the Town”

Try my “Bruschetta on a Bender” (featuring your choice of vermouth or red wine) & “Fried Avocados Paint the Town” (starring tequila) recipes via MariaShriver.com!

I was SO HONORED to address a gathering of 200 St. Mary’s Parish volunteers and share how 92-year-old Sister Augustine and “Five Years in Heaven” have changed my life, and inspired me toward a life of service in everything I…